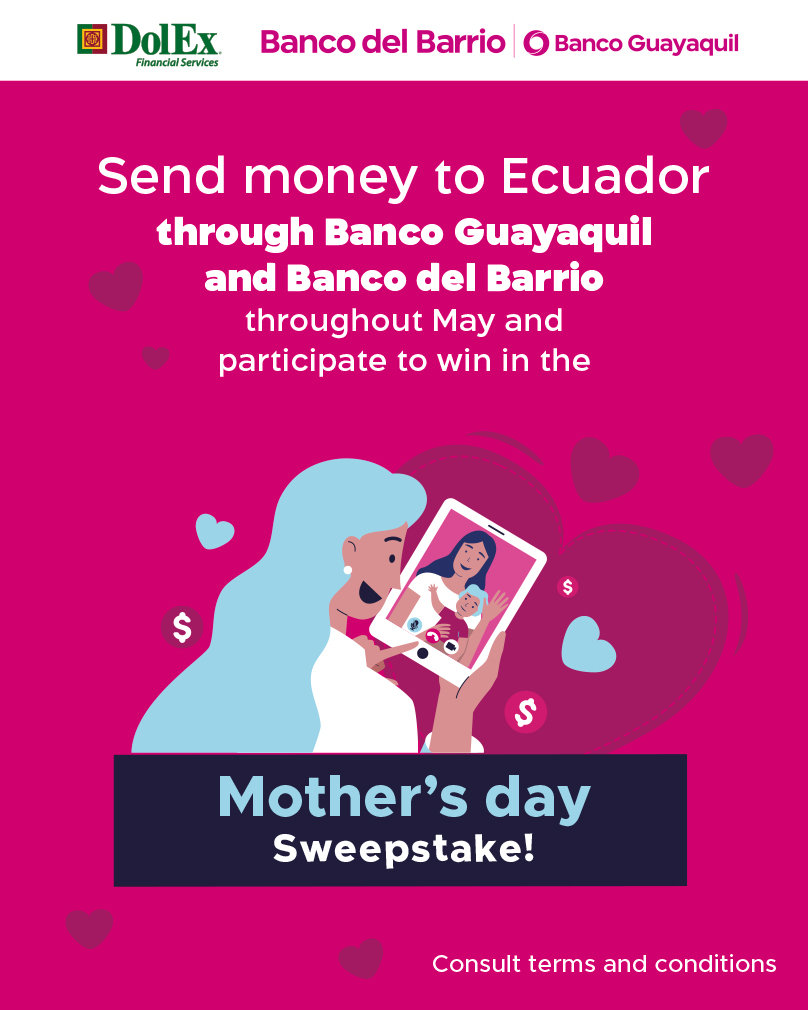 Banco Guayaquil and Banco del Barrio - Ecuador From the 1st to the 31st of May, 2022 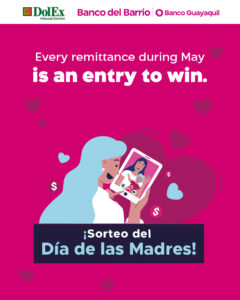 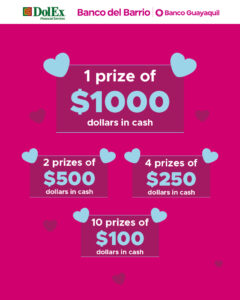 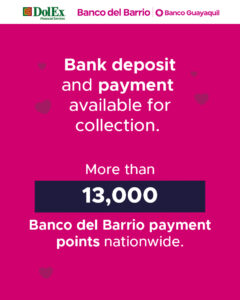 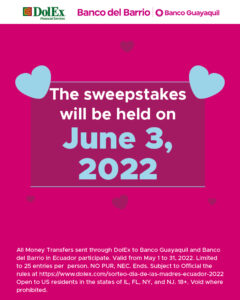 DATES: The “DolEx & Banco Guayaquil Mother’s Month Sweepstakes” (the “Sweepstakes”) begins at 12:00 a.m. Central Standard Time (“CST”) on May 1, 2022 and ends at 11:59 p.m. CST on May 31, 2022 (the “Sweepstakes Period”). For purposes of these Official Rules, all times are given in CST. The date and time stamp from the Website (defined below) will be the “official computer” and official time keeping device for this Sweepstakes.

ELIGIBILITY: The Sweepstakes is open to residents of the United States who reside in the state of New Jersey, New York, Illinois, and Florida and are eighteen (18) years of age or older (or the age of majority in their respective jurisdiction of residence) at the time of entry (each, an “Entrant”). The Entrants who are selected as the potential prize winners must each have a unique, personal, and valid social security number or ITIN for Sponsor (defined below) to report the tax liability associated with acceptance of the respective prize. Valid social security numbers/ITINs will be determined by Internal Revenue Service (“IRS”) requirements as further defined in the “PRIZE CLAIMS” section of these Official Rules. Employees and their immediate family members (parents, children, siblings or spouse, regardless of where they live, or persons living in the same household, whether related or not) of DolEx Dollar Express, Inc.(the “Sponsor”), and each of their respective parent companies, divisions, affiliates, subsidiaries, distributors, advertising and agencies, and any others engaged in the development, production, execution or distribution of this Sweepstakes, (all of the aforementioned collectively referred to as the “Sweepstakes Entities”), are not eligible to participate. The Sweepstakes is subject to all federal, state, and local laws and regulations and is void where restricted or prohibited by law. By entering this Sweepstakes, Entrants indicate their full and unconditional agreement to, and acceptance of, these Official Rules and the decisions of the Sponsor and/or Independent Administrator, which are final and binding in all respects. Winning a prize is contingent upon fulfilling all requirements set forth herein.

HOW TO ENTER: There are two (2) ways to receive entries into the Sweepstakes; (a) by making a money transfer as described below (the “Money Transfer”); or (b) without making a Money Transfer (the “Alternate Method of Entry” or “AMOE”). Entrants may enter via either of the entry methods listed below. Regardless of the entry method(s) used to obtain entry into this Sweepstakes, there is a total limit of twenty-five (25) entries per person for the entire Sweepstakes Period.

Regardless of the method(s) of entry used to participate in this Sweepstakes, either Money Transfer, the AMOE or a combination of the two (2) entry methods, the maximum number of entries allowed per Entrant is twenty-five (25). In the event of a dispute regarding the identity of the person who submitted an entry, the entry will be deemed submitted by the Authorized Account Holder (defined below) of the email address associated with the DolEx account (if the entry was received via Money Transfer) or the e-mail address connected with the email account submitted via the AMOE postcard. “Authorized Account Holder” is defined as the natural person who is assigned to an e-mail address by the Internet access provider, online service provider, or other organization (e.g., business, educational institution, etc.) that is responsible for assigning e-mail addresses for the domain associated with the submitted e-mail address. An Entrant may be requested to provide Sponsor with proof that the Entrant is the Authorized Account Holder of the email address associated with the entry. Any attempt by any Entrant to enter this Sweepstakes using multiple/different accounts or any other methods may void the Entrant’s entries and may result in disqualification, at the sole discretion of Sponsor. Use of any automated system to participate in the Sweepstakes is prohibited and may result in disqualification. The Sweepstakes Entities are not responsible for any entry that is lost, late, misdirected or  undeliverable, whether due to system errors, omissions, interruptions, deletions, defects, delays in operation or transmissions or any other reason, theft or destruction or failures, faulty transmissions or other telecommunication malfunctions, entries not received resulting from any hardware or software failures of any kind, lost or unavailable network connections, failed, incomplete or garbled computer or telephone transmissions, typographical or system errors and failures, technical malfunctions, or otherwise. Late entries or entries sent via any other method than those stated above will not be accepted.

PRIZES: The total approximate retail value (“ARV”) of all prizes to be awarded in this Sweepstakes is $4,000. The prizes are broken down as follows:

Prize winners cannot assign or transfer the prize to another person. No prize substitution or cash alternative allowed except at the sole discretion of the Sponsor, who reserves the right to substitute a prize (or any portion thereof) with a prize of comparable or greater value, in their sole discretion. The value associated with the prizes are taxable as income and the prize winners are each solely responsible for any taxes, including, but not limited to, all applicable federal, state and local taxes that become due with respect to the value of the prize received and the tax year for which the prize is awarded. The Sponsor, or a third party acting on its behalf, is required to report the value of the prize to the Internal Revenue Service in the year the prize is received by a prize winner; and the value of the prize will be reported to the prize winner and the Internal Revenue Service in the form of a Form 1099 and/or other applicable tax forms. There is a limit of one (1) prize per person/household. Except as otherwise set forth herein, all prizes will be awarded.

GENERAL RULES OF PARTICIPATION: By participating in this Sweepstakes, Entrants and prize winners [a] release each and all of the Sweepstakes Entities, from any and all liability, damages or causes of action (however named or  described) with respect to or  arising out of  participation in the Sweepstakes, and/or the receipt or use/misuse of the prize awarded, including, without limitation, liability for personal injury, death or property damage; and [b] agree to be bound by these Official Rules and the decisions of the Sponsor, which are final in all respects and not subject to appeal. Sponsor reserves the right permanently to disqualify from this Sweepstakes any Entrant or prize winner it believes has violated these Official Rules. Sponsor may prohibit an Entrant from participating in the Sweepstakes or winning a prize if, in its sole discretion, it determines that said Entrant is attempting to undermine the legitimate operation of the Sweepstakes by cheating, hacking, deception, or other unfair playing practices or intending to annoy, abuse, threaten or harass any other Entrants, Sponsor, or Sweepstakes Entities. If for any reason this Sweepstakes is not able to be conducted as planned, including, but not limited to, by reason of infection by computer virus, bugs, tampering, unauthorized intervention, fraud or any other causes beyond the reasonable control of Sponsor which corrupt or affect the administration, security, fairness, integrity or proper conduct of the Sweepstakes, then Sponsor reserves the right at its sole discretion to cancel, terminate, modify or suspend the Sweepstakes and select the prize winners in a fair and equitable manner consistent with these Official Rules. Notification of such action will be provided on the Website. To the fullest extent permitted by law, Entrant’s covenant not to sue any Sweepstakes Entity or cause them to be sued regarding any matter released above; and further covenant not to disaffirm, limit or rescind any releases. A waiver by one or more of the Sweepstakes Entities of any term in these Official Rules does not constitute a waiver of any other provision. CAUTION: ANY ATTEMPT BY A PERSON TO DELIBERATELY DAMAGE OR UNDERMINE THE LEGITIMATE OPERATION OF THE SWEEPSTAKES MAY BE IN VIOLATION OF CRIMINAL AND CIVIL LAWS AND, SHOULD SUCH AN ATTEMPT BE MADE, SPONSOR RESERVES THE RIGHT TO SEEK REMEDIES AND DAMAGES (INCLUDING ATTORNEY’S FEES) FROM ANY SUCH PERSON TO THE FULLEST EXTENT OF THE LAW, INCLUDING CRIMINAL PROSECUTION. SPONSOR’S FAILURE TO ENFORCE ANY TERM OF THESE OFFICIAL RULES SHALL NOT CONSTITUTE A WAIVER OF THESE PROVISIONS.

NO LIABILITY: By participating, Entrants and prize winners each agree to release, discharge, indemnify and hold  harmless  the  Sponsor, and  the  Sweepstakes  Entities,  and  each  of  their respective officers, directors, employees, representatives and agents from and against any claims made by a prize winner, Entrants, or any other third parties, related in any way to the operation of this Sweepstakes as well as any other claims, damages or liability due to any injuries, damages or losses to any person (including death) or property of any kind resulting in whole or in part, directly or indirectly, from  receipt, acceptance, possession, misuse or use of a prize; participation in any Sweepstakes-related activity; or participation in this Sweepstakes.

DISPUTES: Entrants agree that any and all disputes, claims, and causes of action arising out of, or connected with, the Sweepstakes or a prize awarded shall be resolved individually, without resort to any form of class action, and exclusively by the appropriate court located in Texas. All issues and questions concerning the construction, validity, interpretation and enforceability of these Official Rules, an Entrant’s rights and obligations, or the rights and obligations of Sponsor in connection with the Sweepstakes, shall be governed by, and construed in accordance with, the laws of Texas, without giving effect to any choice of law or conflict of law rules (whether of Texas or any other jurisdiction), which would cause the application of the laws of any jurisdiction other than Texas.

This Sweepstakes shall not be published without permission of the Sponsor

This website uses cookies to improve your experience while you navigate through the website. Out of these cookies, the cookies that are categorized as necessary are stored on your browser as they are essential for the working of basic functionalities of the website. We also use third-party cookies that help us analyze and understand how you use this website. These cookies will be stored in your browser only with your consent. You also have the option to opt-out of these cookies. But opting out of some of these cookies may have an effect on your browsing experience.
Necessary Always Enabled
Necessary cookies are absolutely essential for the website to function properly. This category only includes cookies that ensures basic functionalities and security features of the website. These cookies do not store any personal information.
Functional
Functional cookies help to perform certain functionalities like sharing the content of the website on social media platforms, collect feedbacks, and other third-party features.
Performance
Performance cookies are used to understand and analyze the key performance indexes of the website which helps in delivering a better user experience for the visitors.
Analytics
Analytical cookies are used to understand how visitors interact with the website. These cookies help provide information on metrics the number of visitors, bounce rate, traffic source, etc.
Advertisement
Advertisement cookies are used to provide visitors with relevant ads and marketing campaigns. These cookies track visitors across websites and collect information to provide customized ads.
Others
Other uncategorized cookies are those that are being analyzed and have not been classified into a category as yet.
SAVE & ACCEPT
Powered by